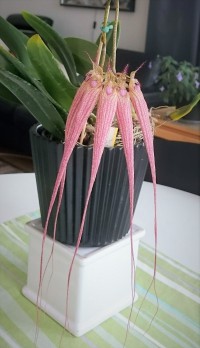 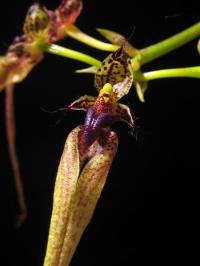 ORIGIN
Angraecum is a genus of about 200 species that are from the tropical regions of Africa, Madagascar and surrounding tropical islands, and Sri Lanka. Angraecum sesquipedale is primarily from Madagascar and grows in the warmer, tropical, lowland forests of this mini continent.

SPECIAL INTEREST
In 1850, in Madagascar, Charles Darwin discovered an orchid with white and waxy petals, Angraecum sesquipedale, with a 16 inch spur. At the base of this tube is a sweet liquid. Darwin surmised that this nectar was clearly destined for the orchid's pollinator and maintained that there must be an insect in the Madagascan forest with a 16 inch proboscis, and in addition, it must be nocturnal because the Angraecum is fragrant only at night. Fifty years later, after Darwin suffered much ridicule, such an insect was discovered--Xanthopan morgani predicta (hawk-moth). It has a strange coil on the front of its head. Attracted by the smell, the moth is drawn to the orchid and the strange coil is unfurled to a length of precisely 16 inches, an exact match to the spur of the Angraecum sesquipedale. A perfect example of Creative genius.

DESCRIPTION
Angraecum sesquipdale is a monopodial epiphyte. Lacking pseudobulbs, its leaves are positioned in a fan shape. It is a medium sized plant, reaching 3 feet when mature. The nightly fragrant flowers are characteristic of the genus in that they have the long spur, a tube which encircles the base of the column. At the base of the spur rests the moth-attracting nectar. The blossoms are white or greenish white and are often up to 4 inches across. The species blooms December through February.

LIGHT REQUIREMENTS
This is an easy plant to grow on a windowsill or under lights. It needs some shade and should not be subjected to any direct sun. An east or west window with a sheer curtain is ideal. Provide adequate ventilation.

TEMPERATURE
They should be grown in intermediate conditions with day temperatures in the 70 - 80 F range and nights between 60 - 68 F. They will appreciate a short cool period after flowering, but no definite rest period.

POTTING MEDIUM
These plants do well grown in baskets or pots of bark. Other mediums include osmunda and sphagnum moss. Use plastic pots with adequate drainage holes. Repot in the spring. 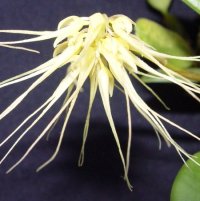